We have 33 intimate & comfortable rooms situated around our 20 acre grounds in eight buildings.

All rooms have ensuite bathrooms & have complimentary tea & coffee making facilities. None of our rooms have TV’s or Telephones so as not to distract you from the glory that is Wells Gray Provincial Park & the wilderness that surrounds & welcomes you. None of the rooms at the lodge have kitchens or fridges in them.

We do have a fridge that all guests are welcome to use at the Front Desk area of the main Lodge, which is accessible throughout the day from when front desk opens & closes.

Rates below are for the 2022 Season 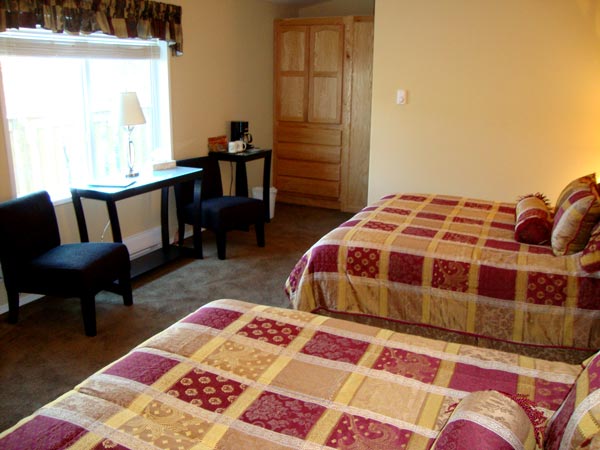 The Standard rooms are situated over six buildings.

Two rooms are situated in the original McDougal Cabin built by the Hogue brothers in 1922. These two rooms have one double bed in each room. These can Sleep up to a maximum of two people.

The remaining standard rooms are in four more chalet buildings & each of these buildings house three rooms in each. These come with two double beds in each room. All of these rooms have a small deck area in front of the rooms.

All standard rooms have a view over the Golf Course & the Trophy Mountains.

Additional people are $24.00 plus tax per night per person - Rooms sleep a maximum of 4 people only.

2017 Completed renovations to the Log rooms - These rooms now come with two queen sized beds & all have new carpet laid in the rooms.

These are situated in two Log cabin buildings that were added to the Lodge’s property in 1987.

Each building houses four rooms. Two upstairs with balconies & two downstairs with deck areas in front of the rooms.

These rooms sleep up to four people, with two queen sized beds in the rooms.

The downstairs rooms can accommodate five people with a single rollaway bed.

These rooms not only overlook the string of horses here at the Lodge & the Golf Course but have a great Trophy Mountain view.

Additional people are $24.00 plus tax per night per person - Rooms sleep a maximum of 4 people only.

Some rooms can accommodate 5th person with a rollaway bed - must enquire if available. Additional Rollaway charge is $27.00 plus tax per night, Single (Rollaway bed recommended for teens or children only).

Rooms have a 14 Day cancellation policy in place. Less than 2 days will incur a 100% charge of the stay booked.
Payment for rooms is payable 14 days prior to guest arrival.

Payment Policy:
All payments are charged 14 days prior to arrival to the credit card held on the Booking.